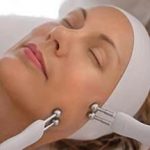 A non-surgical facelift which cannot be felt as it does not twitch or contract muscles. It is a tiny current that works on the cellular level and builds the energy of the skin cells which deplete as we age. At this procedure, we re-educate the facial muscles and work on fine lines to reduce them. Botox freezes the muscles while here we stimulate and activates them. With Microcurrent we are naturally smoothing and softening expression lines and wrinkles.

At the same time, microcurrent increases the production of collagen to diminish wrinkles and smooth the complexion.

With consistent treatments, you will get incredible results for boosting collagen, reducing the appearance of fine lines and wrinkles, plumping the skin, and enhancing your natural glow.

Microcurrent facial uses up to 400 microamps of current to systematically reduce the signs of ageing by toning the facial muscles. So this is among the best Facial Toning Devices to get youthful skin. There are various invasive ways available for facial toning and lifting. But this is the most natural and non-invasive microcurrent technology which is best for delivering fast results. It uses current up to 400 microAmps to systematically reduce the signs of ageing by maintaining or increasing Muscle Tone.
We both educate the muscles to bring them to where they were. As well as erasing visible lines.

The Effects of Microcurrent

How is Micro current Done -

Microcurrent is done using simple conductivity Aloe Vera gel which is used to deliver current in a most calming way via two probs. We re-educate the facial muscles by a lengthening and shortening process.

It is a mini facelift without any needles or surgery and the scalpels.

Microcurrent uses less than 500 microamperes, is typically sub-sensory and, surprisingly, cannot cause a physical or visual contraction of the muscle via the electrical current. Accessories like probes or gloves are used with microcurrent to exercise the facial muscles and re-educate them to be shorter or longer based on their position.We use the two probes that deliver the current to first educate the muscles. Followed by working on erasing wrinkles by stretching and lengthening the muscles.

Although a remarkable difference can be seen after the first treatment, the benefits of microcurrent are cumulative, and typically are performed in a series to gain maximum results. The average treatment series consists of 6-12 treatments, generally administered over a 6-12 months period. The one thing to keep in mind is that microcurrents cannot replace fat tissue that has been lost in the face.

Contact to Book your Next microcurrent facial Sydney Session